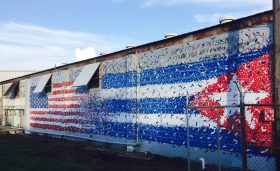 Michel Mirabal is an internationally known Cuban artist who lives and works in Havana, and is recognized as Cuba’s most popular artist. He strives to bridge the gap between Cuba and the US using his vivid imagery to renew relations. 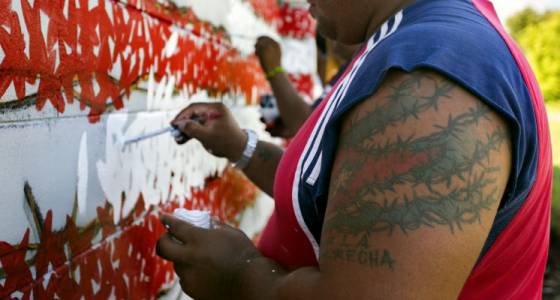 “The barbed wire is the thing we don’t like, the things we need to change about both countries,” Mirabal said. “The flowers are the things we love — the humanity, the coming together.” Mirabal enjoyed his visit to St. Petersburg citing many ways the city felt like home to him, “We are both lively and love the arts,” he said. “There are a lot of similarities”.

Mirabal’s work has been the backdrop to official meetings during President Obama’s visit with the Cuban government, including a historic news conference at Havana’s US Embassy. “Everybody came to take the photos with my painting,” he said with a smile. Mirabal is looking forward to working with St. Pete artists to have their work displayed in his gallery in Havana. “I want this to be a good relationship. This can be good for everyone.”

Later this year, Mirabal’s work will be used on a commemorative credit card edition for Stonegate Bank, which is the first US bank issuing debit cards that can be used by Americans in Cuba. “I want to represent what the people want,” said Michel Mirabal. “What I want when people see my work is thinking about all the time we didn’t have a relationship and it’s time to change that. We are two countries that we have a lot of things to give each other,” he said.