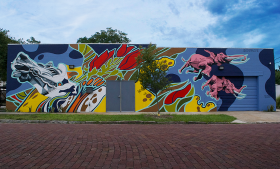 Andrew Spear is currently based in Orlando, Florida, and was born on the South Shore of Boston in 1973. He started drawing on the back of Beatles albums at the age of 5 while listening to the music, and developed an obsession for drawing geometric retro style along the way.

His artwork is motivated by pop culture, visually representing his intense personality. Spear’s proclivity for drawing flowing hair females in his distinct retro style with heavy geometric patterns helped get the attention of some big hitter clientele. His clients include Red Bull, New Era and MTV’s Real World. He has also been featured in many publications and exhibitions, including Juxtapoz Magazine.

Spear prefers drawing with colored pencils with spectacular effect for the viewer. His images seem to jump off the wall or canvas with life. His intimate portraits allow for introspection and he creates subtly skewed proportions that heighten the dreamlike end results.

After art school in Boston and finishing up at Ringling in Sarasota, Spear was hired in Orlando to do scenic work and set design. He continually tests his artistic expertise and continually works to grow as an artist.