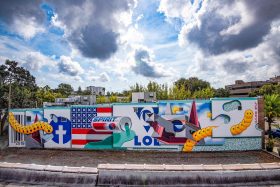 Artistic duo from Berlin, The Low Bros, center their work around skateboarding, animal characters with human features, hip hop, and other influences from their youth.

Brothers, Florin and Christoph Schmidt, were active graffiti writers, Nerd and Qbrk, before joining forces as the Low Bros in 2011. In addition, they have been creating tons of thematic pieces in a series featuring their characters on canvas, in multimedia projects, murals.

They say, “Actually, what we do as Low Bros is something we wouldn’t call a job, it’s rather a passion. Even when it is hard work. It’s very diversified. We spend part of our time indoors, painting new works or building things and the other part outdoors, often doing physical labor as standing on a lift painting murals or building installations and stuff.”

The Low Bros have created characters and use poses that seem exceedingly masculine, however their work shows the attitudes and codes of city life. Their contemporary use of nature motifs and natural purity of animals to give limited glimpses into the future. They have a distinct style that plays with shadow and light in sharp, vivid illustrations. Nostalgia of their youth regularly features in their work in themes from the 80’s and 90’s

Their installations have also been featured in solo and group exhibitions worldwide. The Low Bros really love living in Berlin, and find inspiration in the local art community there. They said, “Berlin is a great place where we find the necessary freedom and independency for our artistic work. The art scene is very vivid, and there’s a permanent coming and going of people with different vibes. Thus, we automatically receive lots of inspiration.”

Find out more about the Low Bros: