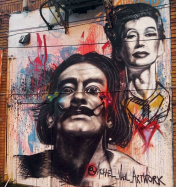 Michael Vahl is a visual artist from Los Angeles, California. He has been drawing since the age of five, and has been honing his skills ever since.

Vahl decided to leave his friends and family in California to pursue his artistic dreams here in the Tampa Bay area. He constantly pushes the limits of his artistic ability to produce beautiful detailed portraiture using acrylic and oil paints. Vahl puts his twist on modern culture and pop art influences that create one of a kind visual experiences.

Some muralists use a “square/percentage” or freehand technique to block out the mural work. Vahl prefers to use a projected image and trace it on the wall before sealing it in with paint. He says, “I’ve done some freehand ones, but I feel that in terms of efficiency, projecting is the best way. That’s what I mainly go to.” Vahl uses a combination of spray painting and drybrushing (using tiny amounts of oil paint on the tip of a brush) to achieve his unique style.

His SHINE mural depicts a three-eyed Aztec goddess surrounded by Rorschach ink blots. Vahl says, “I’m Mexican, so that’s where that came from, and I’m also fascinated by the human mind”. The outline of the feathers in the goddess’ headpiece was painted with brushes, everything else is being done with spray paint. His specialty is portraits of famous faces, and he has painted everyone from Jim Morrison to Lil’ Wayne with his signature textured, urban graffiti-art look.

Find out more about Michael Vahl: